A Tale of Two Thomases

When looking for clues about what makes a story work, it can be very instructive to compare and contrast two versions of a given story—especially if they occupy the same medium, like literature or film. 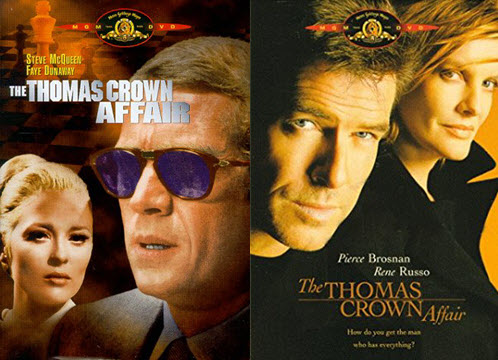 Sometimes, the best way to learn about stories and what makes them tick is to examine side-by-side two (or more) versions of a given story. By looking at the similarities and differences between the versions, as well as their relative strengths and weaknesses, it is possible to extract insights about the stories themselves and derive lessons about storytelling in general.

Comparing stories can be very instructive regarding how stories work.

Although both films take their names from a wealthy thief named Thomas Crown whose actions set in motion the sequence of events that leads to the inciting incident, neither film is actually about that character—in the same way that the war film The Bridge at Remagen is not about a bridge. Instead, the role of main character in both films is occupied by a smart and attractive insurance investigator called in to solve a crime that Thomas has committed. But despite their outward similarities, the two main characters differ markedly from each other with respect to their motivations and goals.

In The Thomas Crown Affair (1968), the main character,Vicki Anderson, is a gain character whose primary motivation seems to be the thrill of the hunt and the getting of both her prey and the reward money she has been promised if she bags him. In The Thomas Crown Affair (1999), the main character is Catherine Banning, a keep character for whom the hunt serves a larger purpose related to her self-image as someone who is self-sufficient and cannot be bested or rendered vulnerable.

The differences between the two Thomas Crown Affair films result, in large part, from the differences in the types of intents of their main characters.

This difference shows up not only in the specific actions and strategies that each main character employs to accomplish their goals but also in the goals themselves and manner in which each main character is affected by her journey. And it is responsible, in large part, for the increased emotional resonance of the remake compared to the original—and its much stronger theme.