An Energetic View of Wants and Intents

In storytelling, wants are to intents as potential energy is to kinetic energy in the physical world—they provide the potential for movement but are not sufficient by themselves to generate action in the story. For that, they transform into intents. 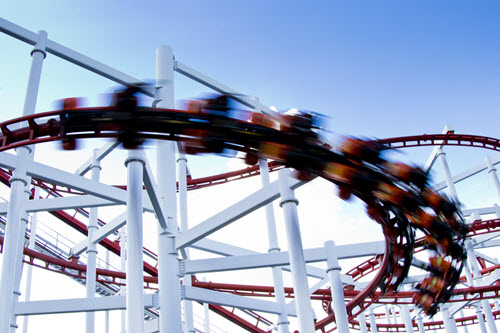 Want as the Stored Energy of Intent

Chapter 3 of Discovering the Soul of Your Story identifies the critical difference between wants and intents and reveals the role of intent as the true driver of story movement. To illuminate this idea from a non-storytelling standpoint, we can draw a convenient analogy to the world of physics—specifically to the two basic forms of energy, potential and kinetic.

Science talk. Bear with me.

Potential energy can be thought of as the energy stored in an object at rest—for example, a spring compressed tightly, a rollercoaster car sitting atop the peak of a coaster run, or someone teetering off-balance at the top of a staircase. Kinetic energy manifests as motion—the spring releasing, the rollercoaster car racing down the rails of the first steep drop, or the unfortunate bloke at the top of the stairs losing his balance and tumbling all the way to the bottom.

Potential energy and kinetic energy share a symbiotic relationship. So do wants and intents.

The two forms of energy may be said to share a symbiotic relationship. Kinetic energy is the physical release of potential energy into the world. Potential energy may create tension, but it is impotent with respect to the universe until the tension is released in the form of movement (as kinetic energy).

From Science to Storytelling

A similar relationship may be said to exist between wants and intents in storytelling. Specifically, a want might serve as the impetus for an intent, but without the intent, it is useless with regard to story movement. As Chapter 3 of Discovering the Soul of Your Story points out, one can sit in a hut in the mountains of Tibet and want something, but to create significant movement toward achieving that want, one must put on one's gloves and get to work.

An honest intent cannot exist without the want that manifests as the story goal.

But an honest intent cannot exist without the want that manifests as the story goal for the character who possesses it. And remember, "action" and "movement" are not the same thing in the world of storytelling. Action without intent may catch the attention of the audience, but we will quickly discern that it has nothing to do with story movement, at which point it will become a time-wasting annoyance that will cause us to cast off our suspension of disbelief.

So in this way, the relationship between wants and intents can be said to mirror that between potential and kinetic energy, respectively. One creates the possibility of movement; the other turns that possibility into the movement itself—and in the process creates something worthy of attention.

Which is a major goal of this whole storytelling gig.