Aphorisms are well-suited to generating story ideas, because they often contain recommended approaches or courses of action that serve as kernels for story themes. Here, we examine two from the domain of card games. 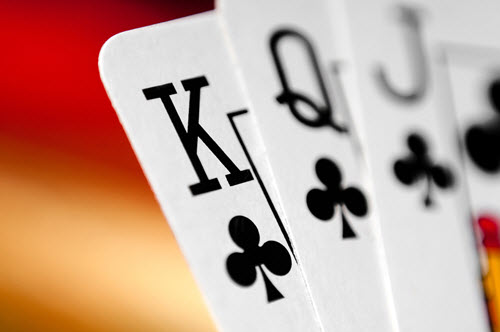 Idioms can serve as rich sources of story ideas, because they often contain at their core a quality or value that can be judged as good or bad, right or wrong, advisable or inadvisable—and which, therefore, can provide the basis of a story theme. Here, we look at a few issues that might be derived from two idioms taken from card playing:

(For a step-by-step process of creating a story from any issue, see Part Three of Discovering the Soul of Your Story).

The idiom "according to Hoyle" refers to rules of card play established by Edmond Hoyle (1672–1769), an English writer whose 1742 publication titled A Short Treatise on the Game of Whist became the authoritative rule book for the game. If something is described as "according to Hoyle," it conforms to established rules.

Because the idiom concerns the adherence to rules, it may be said to contain the issue of "obeying rules," the advisability of which has been debated in story form throughout history. On one side of the debate are those storytellers who consider such obedience inadvisable and tantamount to cultural stagnation and demise—for example, in stories such as the film Footloose (1984). On the other side are those who consider obedience to authority not only advisable but essential for societal stability and proper living—for example, in the Biblical story of Jonah and the whale (Jonah 1:1—4:11).

Because the idiom concerns the adherence to rules, it may be said to contain the issue of "obeying rules."

Regardless of which side you wish to advocate in your story, the first step in creating the story itself involves translating the issue into an endeavor to be attempted by a main character. And the main character, in this case, is likely to manifest either a spirit of rebellion (especially suitable for a gain or regain character) or one of control (for a keep character).

Laying One's Cards on the Table

The idiom "laying one's cards on the table" refers to openly revealing one's intentions or resources to others—for example, to bring about an end to a debate or negotiation. The advisability of doing so in real life might depend on the circumstances and relative strengths and vulnerabilities of the person doing the card-laying and the audience to whom the intentions and resources are revealed. But at its core, the idiom contains the essential issue of "being open and honest with others."

"Laying your cards on the table" refers to openly revealing one's intentions or resources to others.

As with any story created using an issue as its starting point, the arc and theme of the story depend on the debate position advocated (though not necessarily held) by the storyteller. In this case, for example, a story addressing the issue of "being open and honest with others" might focus on a keep character who considers his own adherence to a strict personal policy of honesty and openness to be a point of pride—and who is forced to question the policy when the adherence leaves him or his loved ones vulnerable to those who might use personal information against him. On the other hand, the story might involve a keep character who attempts to maintain what he considers to be important personal secrets, only to find out at the moment of crisis that he must reveal them in order to save himself or his loved ones from ruin.

The issue could also be addressed, of course, using a main character with a gain or regain type of intent. And although the choice of either would change the specifics of the story arc, it would not alter the issue at the heart of the story—and might not even alter its theme.