An embittered creature who cannot stand the joyous sounds of Christmastime devises and executes a plan to steal the very holiday itself from the town of innocents located at the base of the mountain on which he lives. 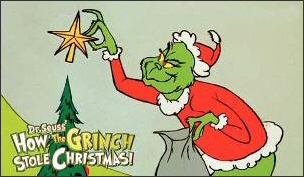 Production Co(s): The Cat in the Hat Productions; MGM Television

The Story on the Screen

In the 1966 animated television special, How the Grinch Stole Christmas!, the main character, Grinch, is an embittered creature who cannot stand the joyous sounds that issue loudly at Christmastime from Whoville—a town of innocents that lies at the base of the mountain on which he lives. To prevent the noises from coming one year, he devises a plan to steal the very holiday itself, which he imagines to consist of the trappings of Christmas instead of the spirit that gives them meaning. The plan backfires in the end, and he comes to appreciate the spirit of Christmas for the first time.

To examine this story in light of the grok approach, we must first identify the main character and his type of intent. In this case, it is easy to identify the main character—his name is in the title, and the story makes him the focus shortly after it begins. His type of intent, however, requires a bit of examination to arrive at and determine whether it lies in the realm of gaining, regaining, or keeping.

We can dismiss at the outset the possibility that the intent of the Grinch involves regaining, because as far as we know, he has never not known the noise of Christmas in Whoville—whose exuberant celebrations seem to be a longstanding tradition. His treasure is not one that he possessed at one time and then lost or had taken away; ergo, there is nothing for him to regain.

Likewise, we can discard the idea of keeping as his type of intent. A keep character is satisfied with the state of things as they are and does not act until that state faces a threat. And although the Grinch is free of the noise of Whovillian celebration for 364 days out of the year, he is not at all content with the fact that he lives with the inevitability of its return. So no, he is not a keep character, either.

The main character, Grinch, is a gain character whose treasure is a year without Christmas in Whoville.

The process of elimination reveals, therefore, that the Grinch is a gain character. And it also reveals the treasure he hopes to gain—a year without Christmas in Whoville.

As with many stories, the results of the outcome in this story are judged by us-the-audience using accepted moral norms of proper conduct. Such norms are based on the harms that may be suffered when the norms are violated—and as such, they represent perfectly valid measures by which we may approach the story theme. In this case (and most cases), they also reflect the moral judgment of the storyteller.

Grinch fails in his attempt to prevent the arrival of Christmas in Whoville, and we are pleased that he fails—for everyone's sake, including his own; therefore, How the Grinch Stole Christmas! is a fail/pleased story.

In the course of this story, the Grinch fails in his attempt to prevent the arrival of Christmas in Whoville. And not only does Christmas come despite his efforts, its message gets through to him, his heart grows large, and he accepts an invitation to join the Whos in their holiday feast.

So here is a case where the main character fails in his attempt to pursue an endeavor that the storyteller considers inadvisable. We-the-audience agree with the storyteller and are pleased by the failure; therefore, How the Grinch Stole Christmas! is a fail/pleased story—a characteristic it shares with the great film Casablanca.