When Irene Salinger was a teenager, she spent the summers in the country, where her neighbor was Albert Einstein. Einstein loved to sail and would take her with him on the water, where he shared with her the secrets of living an interesting and productive life. 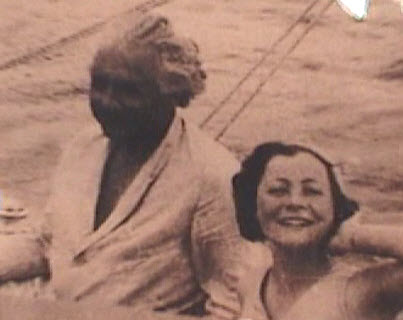 A Creativity Tip from the First Mate

Years ago, I had the great honor of getting to know a woman who remains, even after her passing in 2005, one of the most positively creative people whom I have ever met. Her name was Irene Salinger, and her life was the stuff of sweeping inspirational sagas—from her childhood in pre-Nazi Berlin to her work as a youthful columnist for Die junge Dame (The Young Woman) to her marriage to a judge 18 years her senior and the necessity of their post-honeymoon exodus from Germany as the Nazi Party strengthened its grip on power... to her employment in the Los Angeles movie industry, where she designed costumes for more than 30 films and worked with Alfred Hitchcock... to her creation of her own clothing line, Irene Saltern of California, and her detailed management of that business even as she took care of her dying husband.

Irene's depth of creativity revealed itself to those who met her in the same way that a gemstone may reveal its beauty in subtle stages. First some glint of her uplifting spirit caught your attention, then as you became acquainted with her manner and her stories, the breadth of her remarkable nature seemed to cast a light of its own in every direction.

Irene's depth of creativity revealed itself to those who met her in the same way that a gemstone may reveal its beauty in subtle stages.

For me, the glint (or at least the impulse to look her way) came by way of a casual mention from a mutual acquaintance who said to me, "There's a woman at my health club who I think you'd be interested in meeting. She's in her 80s, and when she was a girl, she knew Albert Einstein." Not long after that, Irene and I began what turned out to be a series of delightful conversations, some of which she was generous enough to allow me to videotape.

I learned the details of the Einstein hook: that when she was in her teens her father had offered the parcel of lakefront property adjacent to his summer home in Caputh to the City of Berlin to give as a gift to Albert Einstein—and that Einstein loved to sail, which is why the city's first attempt to give him property had failed, because it was on a bluff without access to the water. I also learned that Einstein would sometimes take her sailing and that when he did their conversational topics would range from the Theory of Relativity to practical tips about life.

Einstein offered her two important tips for living a creative life: Keep something to write with (and on) by your bedside, and... collect interesting friends.

Of these tips, two stood out most prominently. One, which she claimed to have followed throughout her life to great effect, had to do with creativity. Specifically, Einstein told her to keep a pad of paper and something to write with by her bedside—because, he said, all of his best ideas came to him when he was right on the verge of falling asleep. Modern research backs up this claim and couches it in terms of the human brainwave pattern that is present just before sleep, a pattern known as "theta" waves. But in this case, the research is strictly confirmatory; the gravitas of the person making the claim outweighs the scientific measurements.

So if you're looking to boost your creativity and put yourself in position to be visited by new ideas, you could do a lot worse than taking this tip from Albert Einstein, the man who Time magazine named the Man of the Century in 1999: Keep a pad of paper and something to write with (or their electronic equivalents) by your bedside. And if an idea comes to you as you're nodding off, pop up and write it down.

You'll have the rest of the night to sleep, but great ideas are temperamental, and they like to be acknowledged officially when they show up.

Oh, and the other bit of advice from Einstein?