A young man weakened by a battle with cancer struggles with something tangible inside him that seeks to discover his true origins and proper place in the world. 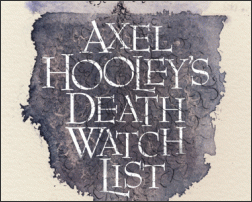 In Axel Hooley's Death Watch List, the main character, Axel Hooley, may be well described as a drifter—less by choice than by circumstance. He is someone whose origins are a mystery even to himself and whom the winds of Fate seem to have blown about, sometimes cruelly but not without purpose, during his 30-odd years on the planet. In fact, his tale may be viewed in some respects as a series of progressive attempts to take control of those winds and learn to use them or, at the very least, understand why his particular sails seem to respond to them as they do.

Axel Hooley is a drifter less by choice than by circumstance, whose origins are a mystery even to himself.

When we-the-audience first meet Axel, he is sprawled in his underwear on a patch of landscaped lawn somewhere in Beverly Hills, California, having apparently just fallen from (or through) a tree. He is disoriented to the point of wondering not only who he is but what he is, and the immediate clues to those puzzles are few—including only his locale and, his name (which comes to him after a bit), and the fact that the deflated bag of his chemotherapy infusion unit hangs in the branches above him.

It is from this abrupt introduction to its main character that the tale of Axel Hooley begins, and the ensuing chapters perform three main tasks:

By interweaving scenes from the present with those of the past (recent, long-ago, and even very deep), the storyteller is able to form and maintain the connections necessary to create a compelling ultimate struggle when it finally appears near the end of the tale.

By interweaving scenes from the present and past, the author successfully forms and maintains a compelling struggle for the main character.

Along the way, we-the-audience are introduced to the most significant players in Axel's life, who together comprise the core ensemble of the tale. Of these, the opposing characters are confined largely to his past, and his present includes only those whose loving concern for him unites them as a tag team of allies—some of whom he includes on a "death watch list" of friends whom he believes (rightly) that he can count on to help him navigate the day-to-day operations of his cancer treatment therapy.

Some of these allies help him in practical ways, making sure that he is cared for physically; others attempt to help in ways that he does not understand at first. But each is driven by the desire to assist him in his journey toward health. And because the storyteller employs well-rendered elements of magical realism in the tale, no effort seems more or less important than the others. Each is necessary to Axel's health and well-being, if only in some small way.

In the context of principles outlined in Discovering the Soul of Your Story, Axel Hooley's Death Watch List must be classified as a "tale" rather than a "story" (see "The Difference Between a Story and a Tale.") Specifically, its sequence of events is not driven (or even directed) by an overarching goal on the part of the main character the achievement of which can be measured clearly in terms of success or failure at the end. Axel is floating down the river of life, not paddling against its currents. This does not mean that he lacks a compelling internal drive, only that the drive does not provide the primary conscious focus for a direct attempt to satisfy an intent.

The novel represents more of a tale than a story; therefore, it is not driven by the direct attempt on the part of the main character to satisfy an intent.

Axel's case is special, however, because although he himself does not possess a clear intent that drives the tale, something tangible inside him does possess such an intent. And when that "something" reveals itself as a character unto itself, it becomes clear that it and Axel are on a journey together, inextricably entwined—and that the intent of the "something" may be said to be their shared community property. In fact, the intertwining is so complete that it is directly related to the issue and proposition of the tale (see below).

Despite the title and the fact that much of the present action revolves around Axel's interactions with his very supportive friends, the issue of Axel Hooley's Death Watch List does not lie in the realm of "helping others in times of need" or "relying on friends or friendships." Nor does it involve "coping with unearned adversity," which might be implied by the fact that Axel's cancer is not something he invited into his life with bad behavior. Instead, the issue lies in the realm of "identity"—specifically, "finding out who you are and your place in the world." This is the issue that erupts to the surface when the events of the tale approach their climax, and it is evident as a driving force from the very beginning, when Axel finds himself face down on the Beverly Hills lawn with no clear idea of who he is or how he got there and we are informed that his "quest for self... was epic in nature and sprang from a raw and long-forgotten place just beyond memory's reach."

As with any well-told tale, the issue informs most of the episodes and serves as the background against which its events plays out. It appears in subtle elements, such as those related to Axel's birth certificate and his grown-up physical appearance as someone whose ethnic background "could be just about anything." And it also appears explicitly, sometimes voiced out loud by members of the core ensemble, such as: "Knowing [about your origins] is better," and "If you have some idea of who you are, you're way ahead of most people."

Although the desire for self-knowledge does not drive most of the action in the tale, it appears to be one that the author considers as the basis of its advisable endeavor.

In this story, the treasure for the main character ("possession of the truth about one's identity and place") is not one that he owns and is under threat of losing. Nor is it a treasure that he owned previously and lost. Consequently, Axel is neither a keep character nor a regain character. He is, instead, a gain character. And although the desire for self-knowledge does not drive most of the action in the tale, it appears to be one that the author considers as the basis of an advisable endeavor. Therefore, it is possible to formulate a proposition for the tale as:

When the storms of this tale subside, Axel is left with a knowledge of his own identity that is not quite complete but is complete enough to provide him with a sense of stability and place that he has never before possessed. In other words, he (and/or the "something" inside him) succeeds.

Because the void that needed to be filled in him may be said to be a human universal, it is easy to sympathize with him and to feel good about his sense of fulfillment. Consequently, Axel Hooley's Death Watch List clocks in as a succeed/pleased story. And because the collateral damages associated with his success are few, the ending may be classified as happy.